I love to look at an item and think: How else can I use that? Unused scraps of pretty paper? Flip them over to use as note paper. Use them as filler in packages or presents. Cut them up into itty bitty pieces for your next event, put them in the helium balloons that people can use as their personal confetti cannons and watch as all your pretty scraps flutter to the ground with each perfect pop. No scrap left behind! Reduce, reuse, recycle, repurpose – repeat. There’s always a way to get more bang for your buck.

You know what I’m talking about; you work for a nonprofit.

When it comes to marketing, social media networks often get confetti cannon campaign content: repurposed scraps from mainstream channel messages. Would you use the exact same messaging for a radio spot that you would for a billboard? No, you want to sculpt your messaging in a way that capitalizes on the strength of the individual medium. Social networking is no different. Although it’s easy to set up your marketing automation software to repurpose content from one platform to another, you’d do well to give as much attention to diversifying your social campaign content based on social network as you do on traditional media channels.

Given their emphasis on raising funds for community-owned water projects around the world, it’s no wonder charity: water puts a lot of energy into their own community. To say that charity: water is community-focused would be selling the organization short. Charity: water’s Facebook account isn’t just a page where they ask for donations or post press releases. Rather, it is a community in and of itself; a collage of images, videos, and other messages that weave together stories from the communities they serve and their greater social network community. Community members can choose their own level of involvement from learning to donating to creating charity: water fundraisers of their own. For those who want to dive deeper into the charity: water community well, there’s even a closed group to provide a safe place for charity: water supporters to interact.

In the past few years, the Ad Council launched two video campaigns focused on getting people to rethink bias. The Love Has No Labels campaign started with 10,000 people watching skeletal couples kissing, hugging and dancing on an x-ray screen, allowing the onlookers to come to their own conclusions about the affectionate couples. Audience members were often surprised by their own biases as couples came out from behind the screen. A video of the live event was posted on social media in order to spur on more interaction and discussion. Boy did it ever. The video went viral, receiving over 40 million views in just two days. That’s not all it received. It also received over 1.8 billion media impressions and the attention of one very special (First) Lady: Michelle Obama. The video also tied for Best in Non-Profit in the 8th Annual Shorty Awards. Not to be outdone, the Ad Council came back to win it all the next year with their John Cena-powered follow-up campaign, We Are America.

If you’ve been on Twitter in the past year, you’ve probably seen the #metoo hashtag. Heck, if the numbers are true, there’s a good chance you or someone close to you posted it. What most people don’t realize is that, just like sexual abuse, the me too movement™ isn’t new, it’s just (finally) reaching a higher level of public awareness. Tarana Burke, founder of Just Be Inc, created the “Me Too” campaign in 2007 to create empowerment through empathy and let women who have suffered abuse know they are not alone. In the wake of the Harvey Weinstein scandals, celebrity advocate Alyssa Milano strove to demonstrate the prevalence of these crimes by encouraging victims of abuse to reply to one of her tweets with two simple words: me too. By the end of that month, the #MeToo hashtag appeared in over 1.7 million tweets across 85 different countries. Talk about bringing awareness and building solidarity. 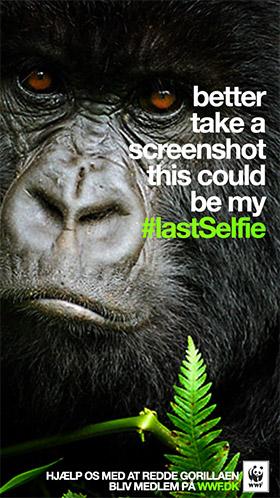 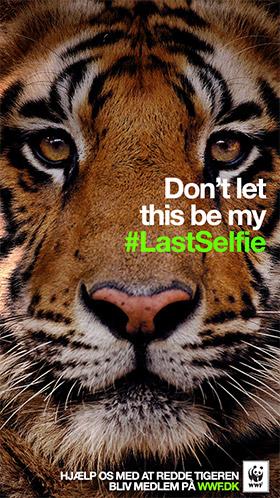 Who would have thought that disappearing messages would be a good way to raise impactful, lasting awareness? Denmark World Wildlife Foundation (WWF), that’s who. Denmark WWF’s #LastSelfie campaign harnessed the power of images, hashtags, and the selfie phenomenon to capture the attention of Millennial audiences on Snapchat. As it turns out, Snapchat’s limited-time messages created an ideal platform for illustrating the urgency of impending extinction.

In a way Snapchat is a mirror of real life. The images you see are transient, fleeting, and gone too soon. They are unique, instant and yet only live for ten seconds.

Our selfies are the same, not just because they are delivered over Snapchat, but because these are the selfies of endangered species. Their plight heightened by the fact that before your eyes they simply disappear…as they will do in real life if we don’t take action.

WWF Snapchat followers received a #LastSelfie snap and were asked to take a screenshot before the snap time ran out. The users would then post the screenshot on their personal social networks. Initiating from one social network, WWF managed to spread an impactful message over multiple social channels worldwide and reached their monthly donation target in just three days.

Repurposing isn’t a bad thing, but when it comes to your campaign, you want a fresh, concise, impactful message. In order to do that, you have to know your audience and your medium. Before you start your next campaign, research your audience and design your campaign on what works best for the networks they use most. Sometimes custom-designs are the best bang for your buck.

Guest author: Melissa Reinke
Melissa Reinke is a writer for TechnologyAdvice.com. She is a storyteller, editor, writer, and all-around word nerd extraordinaire. She spends her days managing web content and her nights unwinding in myriad creative ways, including writing for herself and others. From personal memoirs to professional solutions, when writing and editing for others Melissa’s singular goal is to sculpt each piece into its best, most successful form while maintaining the integrity of the original voice and vision. Based in Music City, USA, Melissa can often be found enjoying great live tunes with even better friends. Then again, she’s just as likely to be found curled up with a good book and a tasty beverage.

This site uses Akismet to reduce spam. Learn how your comment data is processed.

Let's talk about how I can help your organization raise more money.